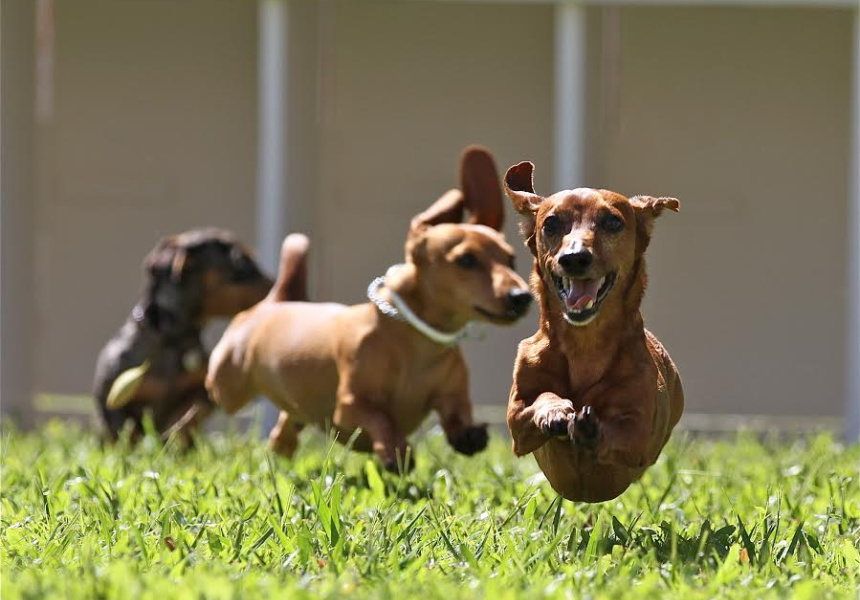 The Running of the Wieners originated in Australia.

Picture this: a pack of dachshunds dressed as hotdogs racing for glory down a 50-metre track. That’s what’s happening next month at Southbank’s Hoptoberfest, Hophaus ier Bar & Grill’s Oktoberfest celebrations.

Many sources cite Australia as the birthplace of Wiener Runs. In the 1970s, they happened alongside whippet and Afghan Hound races as a less-serious aside at greyhound-race events. Possibly because dachshund racing didn’t offer a serious betting arena (dachshunds are known to meander about during heats), wiener races didn’t take off until the ’90s when it was popularised in the USA.

The UC Veterinary Medicine school started holding a Doxie Derby (another name for the dogs) at its annual Picnic Day for students more than 30 years ago as a fundraiser. The sport was then picked up for Miller Lite’s ad campaign in 1993, spurring its popularity across the US.

Today there is a National Wiener Dog Racing Association that hosts national championships each year. At this level, as the dogumentary Wiener Takes All documents, competition dials up the crazy. Since then the Bavarian dogs have returned to the racetrack in their fatherland to become part of many Oktoberfest events. In Australia, an amateur race in Port Fairy has run every June since 2009. It seems to be the only regular wiener run in Australia. That’s set to change this September, though.

Hophaus was inspired to put on its teckelrennen (which translates to dachshund race) by a visit to the Berlin Dachshund Races last year. The Hophaus website describes exactly why you should be excited about the prospect of the racing dackels: “hairy ones, bearded ones, shorn ones – a literal sausage fest, choc-a-bloc full of floppy ears and casual arrogance.”

For those not confident their hound will cross the finish line, they can enter them into a “fashions on the field” type event.

The night before the race Hoptoberfest will kick off with the Tapping of the Keg and German house music. Running from September 18 to 27, the festivities will include a sausage-eating contest, live German music and a special Bavarian Oktoberfest menu throughout. There will also be best-dressed prizes, giveaways, face-painting and a tailored menu for kids.

Hoptoberfest runs at the Hophaus Bier Bar & Grill from 6pm on Friday, September 18 until the following Sunday, September 27. The Teckelrennen (the Running of the Wieners), takes place Saturday, September 19 in Southgate at 10.30am. For more details, head here.

This article was originally posted on Broadsheet on September 1st, 2015.