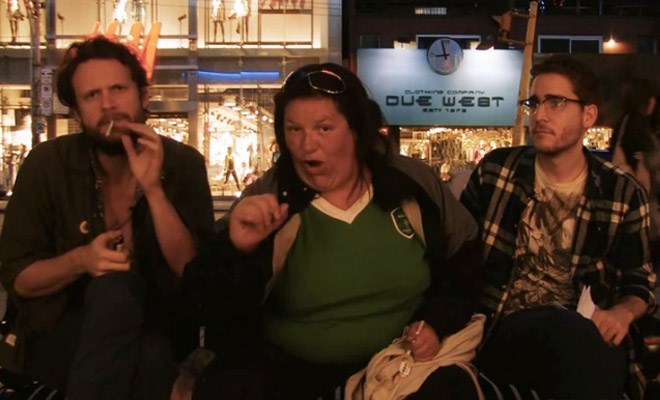 Interviewing the rich and famous isn’t an easy gig. Things can turn down unexpected roads (read: flashing their boobs at you) or go wrong every step of the way (read: making the interviewer cry), especially when the subject of the interview is throwing up roadblocks rather than bringing the quotes. We take a look at some of the most awkward and journo-breaking interviews preserved on the internet FOREVER.

Drew Barrymore gets her cans out for Letterman

While promoting a new movie where she gets her kit off in 1995, Drew Barrymore climbs on Letterman’s desk and flashes him. Oh for Drew’s ‘wild’ days of not wearing a bra.

J Tillman aka Father John Misty is being interviewed on a street bench when homeless woman Kimberley sits down in the middle. FJM doesn’t bat an eyelid and offers her a joint while the interviewer tries to pull it together. Pretty much everything Kim says is gold: “If you can’t eat it, you can’t fuck it.” What does that even mean?

Tyler, The Creator takes questions off journalist and says they’re all stupid.

Ever the diplomat, Tyler opens with a mini-tirade on how much he hates interviews and being asked the same questions. He then takes the journalists questions, only gives proper answers to the ones he thinks are cool while ripping into the lame ones. At least this interviewer can tell their grandkids, Tyler once called them a ‘dickface’.

Top Five things you can say to piss off John Cusack:

Reigniting the cultural cringe for all Australians, Karl attempts to tell the Dalai Lama a joke. The pun is lost via translation; Dalai Lama ends up laughing at Karl instead.

Nardwuar is famed for bringing his interview subjects presents such as rare records and objects related to little-known facts about them. In 1991, Sonic Youth show their thanks by breaking theirs in half and acting like assholes. Eleven years later, Thurston Moore sidesteps an apology.

“Let’s keep this professional and talk about the movie” aka let’s explore the issues of our breakup. This may be a fake, but damn it’s good.

A reporter chats with Mike Tyson over tea. “What is your weakness? As I offer you cannoli.” Bit of a dainty change from when he was telling anchors to ‘frack off’.

– BBC News 24 accidentally interview the wrong person. Poor guy was in the building for a job interview. Totally goes with it.

– Pretty much all interviews with J Mascis are awkward, but this one takes the cake.

– Zooey Deschanel claims to be tired, we reckon their might be vodka in that slurpy.

– Parkinson’s infamous difficult interview with Meg Ryan. If Parky has trouble what hope is there for the rest of us?

– Courtney Love crashes Madonna’s interview, then falls off the stool.

– While proving a point to Jennifer Garner, Conan O’Brien proves he’s a jerk.