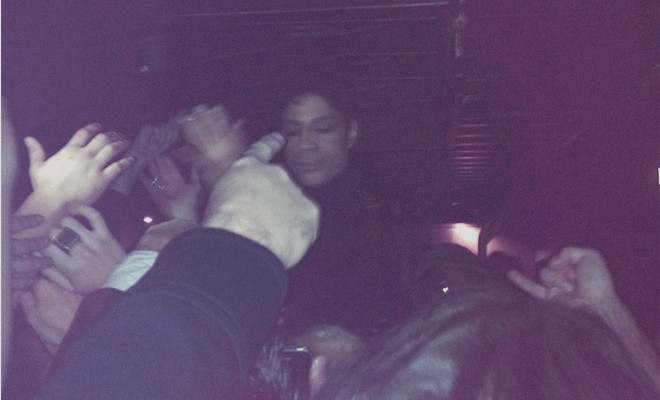 8:03pm I receive a message: “just got a text it’s gonna be a Hi-Fi tonight”. Chowing down dinner my housemate and I dress for warmth and bolt out the door.

9:17pm After tram and taxi panic, we take up our place in the already 120-deep line. It’s the first time we’ve taken a look at the heinous Seven Angels window display in a long time. The line is already down to Collins Street.

9:25pm My housemate and I tag-team to 7-11 for cash and provisions. Knowing the wait is going to be a hefty one, friendships spawn amongst strangers from mutual Prince giddiness (shout out to Tara and Tanya – our new besties)

10pm Tanya receives a phonecall from her friend at the show and we dance to the first encore via satellite, sharing our Prince stories and urban myths.

10:45pm More friends join up with people in the line. The initial 120 people preceding turns into about 400. Tension is starting to seep through the line.

11:15pm Fans who have been lining up since 8pm begin shaming new line-cutters, forcing them to leave.

11:40pm Holy crap the line is moving. We make it to the other side of the Seven Angels store and halt. Only a few people in at a time.

12:30am We make it to the front of the snaking line, rumoured to be thousands of people at this stage and are stopped. Barriers are brought out to forge a path from the front door to Swanston Street.

1:10am Black Mercedes vans pull up and NPG members and hangers on swan down the steps. Amazing feats of blagging ensue from desperate punters – “I worked on Prince’s London tour,” turns into “My friend actually worked on the tour,” which then becomes, “I met the guy who worked on the tour and he said to use his name… no, I don’t know him by face…” (this chick gets let in, presumably to shut her pie-hole).

1:55am Astoundingly it doesn’t feel like five hours has passed, but my feet are developing knowledge of a new kind of pain. If we don’t get let in soon, doctors may have to operate in order to save the rest of my legs. Those that leave briefly are told they have to wait to be let in – Prince is coming. Discussion of his guitar being brought into the venue is whispered to security guards.

1:57am This is not helped by smooshing from the sides and behind – we are occupying prime real-estate. A few false starting cheers become the real deal as a final black Mercedes pulls up on the other side of the road. No one comes out which means Prince is totally in there. iPhones are raised.

2:20am Shit gets real when the giant red umbrellas are popped open into TV cameras view. Suddenly, Prince flies from his car (Prince doesn’t walk) surrounded by his minders. Also realise why celebrities wear sunglasses in nightclubs when 500 camera flashes briefly turn the doorway into daytime.

3:10am We are ushered in and pay our $25. The toilets are full of smoke – people refuse to leave the venue now. Rashida is behind the decks dropping funky beats and plenty of Prince tracks.

3:30am The Purple One appears in the DJ booth. A solarsystem of people orbit the box.

3:35am He sits atop the booth’s corner and lifts his hands as if to let people touch them. Grappling hands spring toward him as if he is healing the sick. He claps along to his own beat (not the music that is playing) as if he is lazily applauding the adoration.

3:45am After seeming to press play on a few tracks, Prince leaves the booth and glides to his private party in the mezzanine. We attempt to dance and enjoy the music.

4am The tunes are pumping and Aretha Franklin’s ‘Respect’ is sung with vigour amongst the impatient crowd. Surely soon, Prince will do something.

4:10am Nothing is happening. The Hi-Fi begins to fill with chants of “We want Prince” – impressively in time with Rashida’s tracks. She even cuts the beats to emphasise the call. Nada.

4:20am “Do you have to work tomorrow? Are you going to stay?” The question becomes the catchcry throughout the venue.

4:30am Attendees begin to cut their losses and head for the door. The tunes might be belting out but fatigue is also setting in.

4:40am In the bathroom, I overhear a girl say she’s “had the best night”. Lining up for six hours too, she also has stories of new friends made and lining up joy. Pretty much sums up what the night was about – feeling the Prince love.

4:45am Cabs are caught and action-plans for wagging work the next day are made. Despite the night being an eight-hour tease, those that had gone the long-haul still had smiles on their faces.

Originally published 31 May 2012 on Everguide.com.au