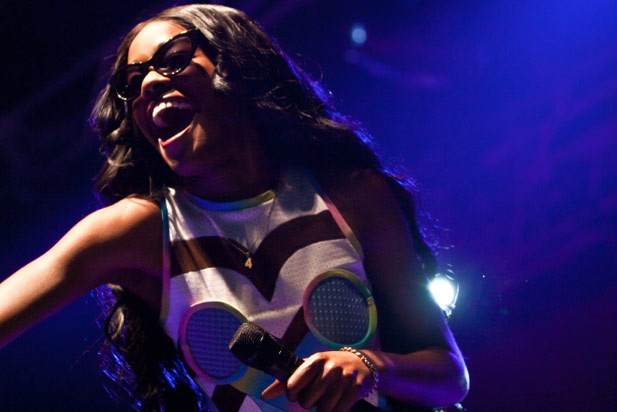 When you’re on your way to concert this is exactly what you want to see from the artist 34 minutes before they’re due on stage:

Perhaps just another example of why someone needs to take Azealia’s smartphone off her, this instagram post set the tone for what fans were treated to last Thursday night at the Palace. Arriving on stage 25 minutes after she was scheduled, it was hard to get the screenshot of Daria out of my head for the show. It wasn’t helped by the disjointed, flailing set of her DJ Cosmo beforehand, who seemed to be grabbing for any way to engage the crowd, switching between Daft Punk, Beyonce, dubstep and ’70s funk. He completely failed to read the crowd.

Azealia’s show was impressive but there was definitely soul missing. I told friends afterwards she was ‘rad’ but a lot of the actual energy of the show can be put down to the audience, who buzzed for her attention and praise with the unconditional love of a puppy. It was the audience who perked her up and noticeably lifted her mood, but in the end it wasn’t the 11-out-of-10 killer show you would have hoped for. I think what I actually liked was the fact I was seeing one of my favourite artists in the flesh. I liked the idea of having gone to Azealia Banks’ show rather than the performance itself.

‘212’ was pretty awesome, and songs like ‘Jumanji’, ‘1991’ and ‘Licorice’ were great as well. The visuals up on the screen worked brilliantly with her tracks, but I didn’t particularly enjoy her dancers who also seemed slightly disconnected from Azealia. Maybe Miss Banks is just spinning further and further into her own universe and nothing can actually cohesively interact with her? Even the fact she’s notched up at least two more beefs (with the Stone Roses and Rita Ora) while in Australia adds to this feeling? In any case, it’s becoming a mission to even enjoy her music these days. We love you Azealia, but you’re bringing us down.