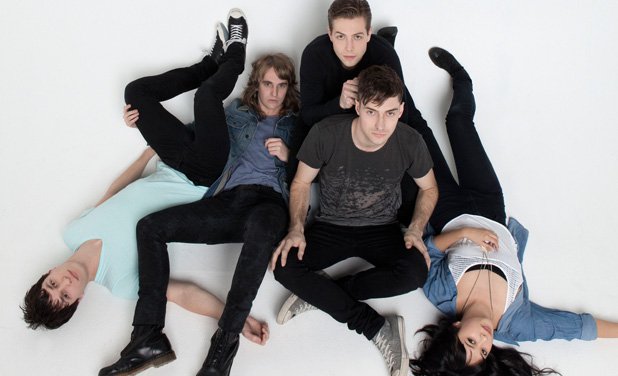 Many would dismiss the Naked and Famous as a one-off summer anthem band – their single ‘Young Blood’ is pretty perfect in that sense. But as I got chatting to lead singer Alisa Xayalith and delved a little deeper into the NAF background, it’s clear they’re an onion and not a parfait. Think Nine Inch Nails, Tricky and a love of comic books and you’ll get a little closer to who they are and what the Naked and Famous are all about.

They’re in the midst of a US tour when I chat to Alisa, they’ve just finished sound check for their show in Seattle and things are going swimmingly. The shows have been “immense” and she’s pleased to be touring with “nice people” in the form of the Chain Gang of 1974 (a slight oxymoron there) and White Arrows – both of whom you should check out if you dig NAF. Taking their name from a lyric in the Tricky song ‘Tricky Kid’, I had to ask: why Tricky and why that song?

“It was around the time that Thom (co-frontman/songwriter) and I first met. We were bonding over common music groups that we both liked. He really liked Massive Attack and I liked Portishead, and he really liked Tricky and introduced me to [him],” she says.

“We thought it was really great when other artists referenced other bands, it takes your fans down another trail of bands that you like or culture that you like. With Tricky… the lyric is ‘everybody wants to be naked and famous’… I think it meant a different thing to Tricky when he wrote it, but to us it just embodies all the ridiculous things about celebritism that we think are so stupid. And, you know, the whole rock and roll stereotype has nothing to do with why we do music. It’s really tongue-in-cheek and a bit cynical.”

Many young bands have to sacrifice parts of their life like uni or work to pursue this path, and the Naked and Famous are no different. For a year, Alisa and Thom decided to go on the dole in order to write Passive Me, Aggressive You. For some this may seem a bit extreme, but Alisa says she and Thom believed it to be necessary and dedicating the time to creating music was less of a sacrifice than not doing it. Making music “was the direction I wanted to take with my life,” she says. “Obviously I did worry about being able to pay rent at times, but an album is a big thing”. On the social side of things, Alisa says she didn’t have to give up things like going out or seeing friends, because she didn’t have many to begin with.

Just from these answers it’s obvious that NAF are a bit more serious than some of their contemporaries, but it’s even more evident upon realising how long they’ve been making music together. When asked if their rise to fame seems pretty fast she is quick to giggle. “No, it doesn’t seem that way. I mean, it’s not like this happened over night. Thom and I have been working really hard. You know, two years before we wrote the album… we met and we were writing songs and our first recordings ended up being our first two EP releases. Then Thom and I took a year out on the dole, writing [their debut] Passive Me, Aggressive You. It took a good year and half, almost two years, until we had that album. It’s taken a while, [it definitely hasn’t] happened over night.”

And it really hasn’t. Their first track ‘All of This’ from their debut was initially released as a single in 2009 and didn’t even chart. Yet it’s unmistakeably one of their strongest tracks.

“Yeah that was, I guess, our first transition to becoming a five-piece. ‘Cos at the time Aaron was just producing and in the studio, and then we had no sound or way for him to take the electronic elements of the recording live. Once we figured that out… we’d made our first step to turning our band into a five-piece. So the live production of what we were able to emulate live… the possibilities were endless. ‘All of This’ was kind of our first out with that new band formation.”

Even though it has felt slow-going for the Naked and Famous, Alisa does say that the last year has been a steady stream of ‘shit just got real’ realisations.

“The last year has just been back-to-back moments of amazing experiences. We get to visit all these places and go on tour in Europe. Meet lots of amazing people and artists who are really inspiring. We’ve played all these famous festivals like Glastonbury, Lollapalooza, Reading and Leeds. We’ve had such a blast and we haven’t taken any of it for granted because we know how hard it is. We’re from New Zealand, and having that chance to get out of New Zealand seemed really unattainable to us when we were being musicians in the first place. The fact that we’re doing this is just a dream come true, really.”

A lot of Australian bands think they’ve got it rough coming out of what is still considered a small scene, but Alisa says it’s even more so in New Zealand. Though she hasn’t been back for a while, she says that the scene is so small and focussed around noise-punk rock that when they would tour around the homeland, there were only one or two bands with whom they could do shows. On top of that there were no real artists they could look to locally (aside from Ladyhawke and Shihad). It’s no wonder they looked to those further afield.

Cue Nine Inch Nails and Tool. Alisa says that while Tool is much more Thom’s thing (the first record he bought was Undertow), all of the members of Naked and Famous would count NIN as one of their favourite bands and probably their biggest influence. At first this sounds ridiculous, particularly if you’ve only heard their singles, but taking a listen to the album in full you do actually begin to get that vibe. Pretty much everything Trent Reznor does inspires them and they try to emulate the way he makes and produces his music. The band were even lucky enough to tour with NIN in 2009 and be told by Mr Reznor himself how awesome their show was. Not too many get to hear that from their idol.

Another unexpected influence on Alisa’s songwriting? Comic books. “I guess [they are] an element of what can inspire me to write. There’s a great plethora of culture that can inspire people to create, but the comic book that I was really into at that time was called Fable. It’s about all of these folklore characters and it’s in New York and they’ve been driven out of their homeland by The Adversary. That sounds so stupid coming out of my mouth, but I really love it and I do like comic books. I haven’t really had a chance to visit any comic book stores while I’ve been on the road but once I head down that path I kind of go into a vortex of comics.” Still don’t believe it? Have another listen to ‘Punching in a Dream’.

Having achieved so much, she’s not sure if there’s anything that could top what they have experienced so far. Aside from the obvious, she counts the Ewok-village-esque Fuji Rock Festival and meeting iconic photographer Mick Rock (who Alisa describes as being “from another world”) as special highlights.

There is obviously so much to Naked and Famous that we’ve only managed to scratch the surface of during this interview. One thing is for sure though, expect great (or even greater) things from NAF in the future. They’re definitely going to be ones to watch and we’ll be fascinated to see the direction their next record takes.