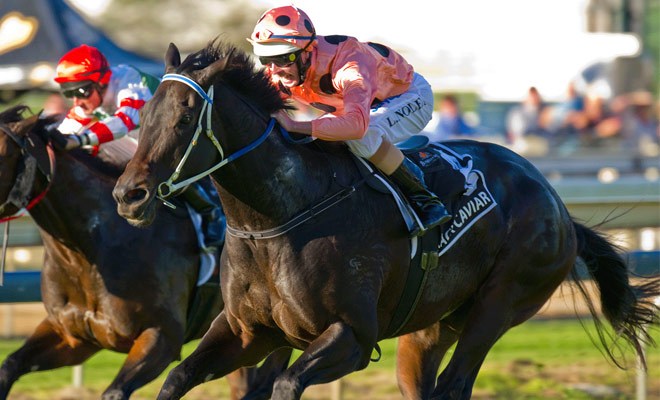 My Little Pony names don’t sound all that silly next to their live counterparts. Racehorse names range from the ridiculous to the clever, but why do they get such names? Do their owners think it will make them go faster? (Well maybe not Crawl’s owner…) The naming of horsies is a science with a whole bunch of rules and restrictions. We found some interesting factoids for you to ponder before registering a thoroughbred’s name.

First off, names are limited to 18 characters – there’s even a horse called Eighteencharacters to demonstrate the point – and once a horse makes the record books (AKA makes a placing) that name can never be used again. Registrars also put all names through a phonetic checker, just to make sure you ain’t trying any funny business (vulgar, obscene or offensive names are a big no-no).

If you want to name a horse after a living person you have to ask their permission. Margaret Thatcher famously declined (the horse was consequently named Weareagrandmother) while Barbara Bush’s consent arrived on White House letterhead. Meanwhile, if you’re celebrating the opportunity to finally name your pony Gaddafi, they’re probably going to say no to that one… Notorious individuals are frowned upon, though I reckon you could probably still get away with B.I.G.

Trawling through articles on funny horse names, they all tend to say a horse named “Blah di Blah by Blah Blah out of Blah” which at first didn’t paint the nicest of visuals, but then I realised they meant out of the names. Ohhhhhh. It is a time-old tradition to draw a new foal’s name from the sire (daddy horse) and dam (mummy horse). Here are some good’uns: Inside Information from Private Account and Pure Profit; Greenie from Naturalism and Ozone Friendly; Gee Spot from Pursuit of Love and My Discovery (gold!); Yes It’s True from Is It True; and one-time Melbourne Cup favourite Plastered derived from Tipples.

Saville’s Anguish was one that had a bit more thought. Remember Jane Saville, the Australian walking athlete who was disqualified just before she entered the stadium at the Sydney Olympic Games? After receiving a final warning card and being kicked out of the race she broke down in tears on international television. So Saville’s Anguish comes from parents Splendid Walk and Final Card.

Waikikamukau: The name is the New Zealand equivalent of saying somewhere is far away, like Timbuktoo. Why-kick-a-moo-cow. Just saying it out loud brings the LOLs. We’re not really sure why… maybe it’s just saying ‘moo cow’?

Makybe Diva: The Melbourne Cup three-time champ was named from the first two letters of each of the women’s names who were working in the owner’s office: Marie, Kylie, Belinda, Diane, and Vanessa.

Hardawn: They banned the one above, but this one got through.

Cunning Stunt: By far the best of the dirty, when you say it out loud you have to think about it really carefully. Though it is a spoonerism Paul Jennings would be proud of, I’m sure the commentators cursed this one when it raced in 1969.

A few others that sidled passed the registrars include: Dirty Sanchez, Muff Diver, Wear The Fox Hat, Sofa Can Fast and Peony’s Envy.

Finally, there’s also the story of Bill Collins calling a race at Caulfield. As three horses broke away he called out their names: ‘Nobody is Nearest to Nothing’. Brilliant.